Beginning its upward climb as a simple stalk straining it’s way out of Florida soil, my tree was at risk from day one. 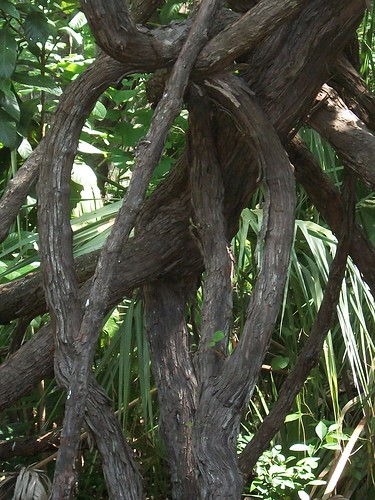 I was counseled to rip it out of the ground when my precious planted-by-the-wind sapling reached the two foot mark.

I didn’t see it as a weed. I saw it as a gift from God. And somehow I saw it grow [in my imagination] into a big beautiful tree, albeit of unknown scientific nomenclature.

The talk of it being a weed continued, but my persistence in letting it grow did also.

I remember hearing such talk about my children when they were about two feet high, too:  “They are growing like weeds. Pull ’em out of your house and put ’em in school.”

Nope not me, I resolved. They may be growing like weeds, but they aren’t weeds. They are my children and I’m going to care for them myself. With God’s help. Right where they were planted by Him. In my home. In my heart. So there, Hurrah. And Hallelujah.

And so it was with my Weed Tree. I didn’t pull it. I let it grow. And it did.

And now they are all three of them, two children and a nearly 30-foot tree, gifts from God, abounding, colorful, and bright spots in my life.

[insert a Jane Austen creation’s snooty voice]
“Weeds?! I should say not.”

(Just don’t look at the rest of my backyard!)

Did you know your children are physicists? They have been experimenting with the laws of physics for years and... read more

What should you do with the parental lessons learned while the children are young?  Hang on to them.  You’ll need... read more

4 Reasons You Need to Attend a Homeschool Conference

Using Halloween To Teach History in Your Homeschool

October is my favorite month of the year. I know; I know. November has Thanksgiving, and December has Christmas. But... read more

Hope for a New School Year

See that shiny new book?  This is our first year going through The Mystery of History vol. II (affiliate link),... read more