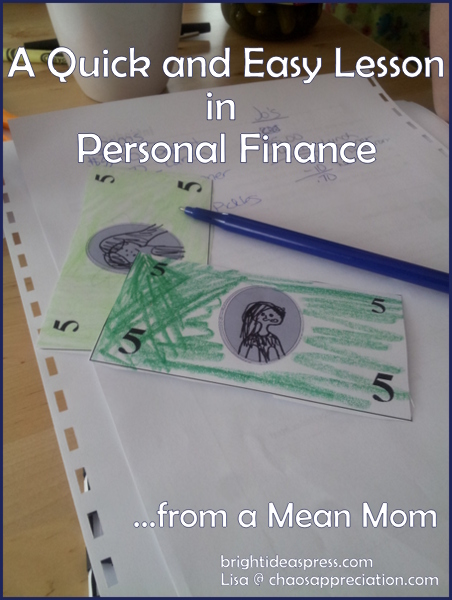 Two weeks ago, I was completely fed up with my kids. I know the fuss was over a mere $5, but sometimes $5 needs to be a big deal. To a lot of families I know, $5 is a big deal; and it’s a big deal all the time, not just on the day before pay day.

We are so blessed that rarely is five bucks something to fight about, but I did not want my children taking even one dollar for granted. All these blessings can be gone in a heartbeat.

I needed a quick and dirty way to get my point across to the girls, and it needed not to involve actual cash since it was a couple days before pay day, and I was terribly short on the green stuff.

Here’s a little spoiler: it’s all fun and games until the pickles run out and Minecraft is threatened.

By the time this little lesson in personal finance was over, I had been called mean, super-mean, uber-mean, and a meany-pants. Some other enjoyable remarks included:

I’m still laughing. Those were the most entertaining two days we’ve had this winter.

Print it out, color it, cut it, or make it with construction paper. We made $8.45. Not sure why it was that much, but that’s how much we ended up with when they became bored with coloring.

I only printed this because I didn’t want to make my own money for processing change. I printed a register for each child on which they could put money on deposit and spend money directly from their account. Next time, I’ll include a lesson in check writing. Get an easy printable register from moneyinstructor.com here.

Send the unsuspecting kids off to list their favorite things: favorite foods, drinks, games, and hobbies. Then momma gets to price them.

Learn to pay your own way.

For the first day, I had the kids pay the bank in advance for lunch and dinner so they didn’t go hungry because of poor planning. I explained the rest of the rules and then bit my tongue when the 12-year-old bought 20 Oreo cookies and an entire jar of pickles. Before bed, they deposited all of their remaining funds.

The next morning they received their daily pay of $8.45. This was the beginning of the “mean mom” remarks. Someone didn’t think it was fair that her sister had over $10. This is where we discussed saving money for another day.

By midday of day two, our nine-year-old was having a blast and our twelve-year-old was furious. Side work was offered in order to earn extra funds. Warnings, not available in real life, were given when funds were getting low. Finding yourself surrounded by people enjoying fresh cupcakes, with no money to purchase your own cupcake, does things to people. Pickles are not as comforting as cupcakes.

What My Kids Learned

So what do you think of my financial planning lesson? Would you attempt something like this to teach your children?

Lisa has been a wife for over 15 years to her Mr. B and been enjoying motherhood for the last eleven. Now the mom of four, she homeschools her chaos makers by whatever means will catch their attention that day. She's a crafter, blogger, designer, chief cook and bottle washer. She is often caught sharing too much, laughing at the wrong things, and falling on her backside. You'll find her being a little too real at Chaos Appreciation or on Twitter where she was affectionately re-named "The Tadey" (Tay-dee) by her friends.

November 1-24, 2013 use code richheritage at checkout to receive 15% off individual All American History products. (AAH bundles are... read more

August 1 – 14, 2013 Take 15% off either Hands-On Geography or The Ultimate Geography & Timeline Guide. Use code circumnavigate at checkout.   August... read more

The Holocaust is a period of history that is difficult to cover in your homeschool lessons simply because of all the... read more

Tips For a Distraction-Free Homeschool

I don’t know about you, but for our homeschool, distraction is always trying to creep in. It seems that... read more

Enjoy this 14 minute overview of the advantages of entrepreneurship for homeschooled teens and some tips for starting the... read more