Yesterday’s photo showed Paddington at the Tower of London! Did you guess correctly? Keep reading for more information about this fascinating site. 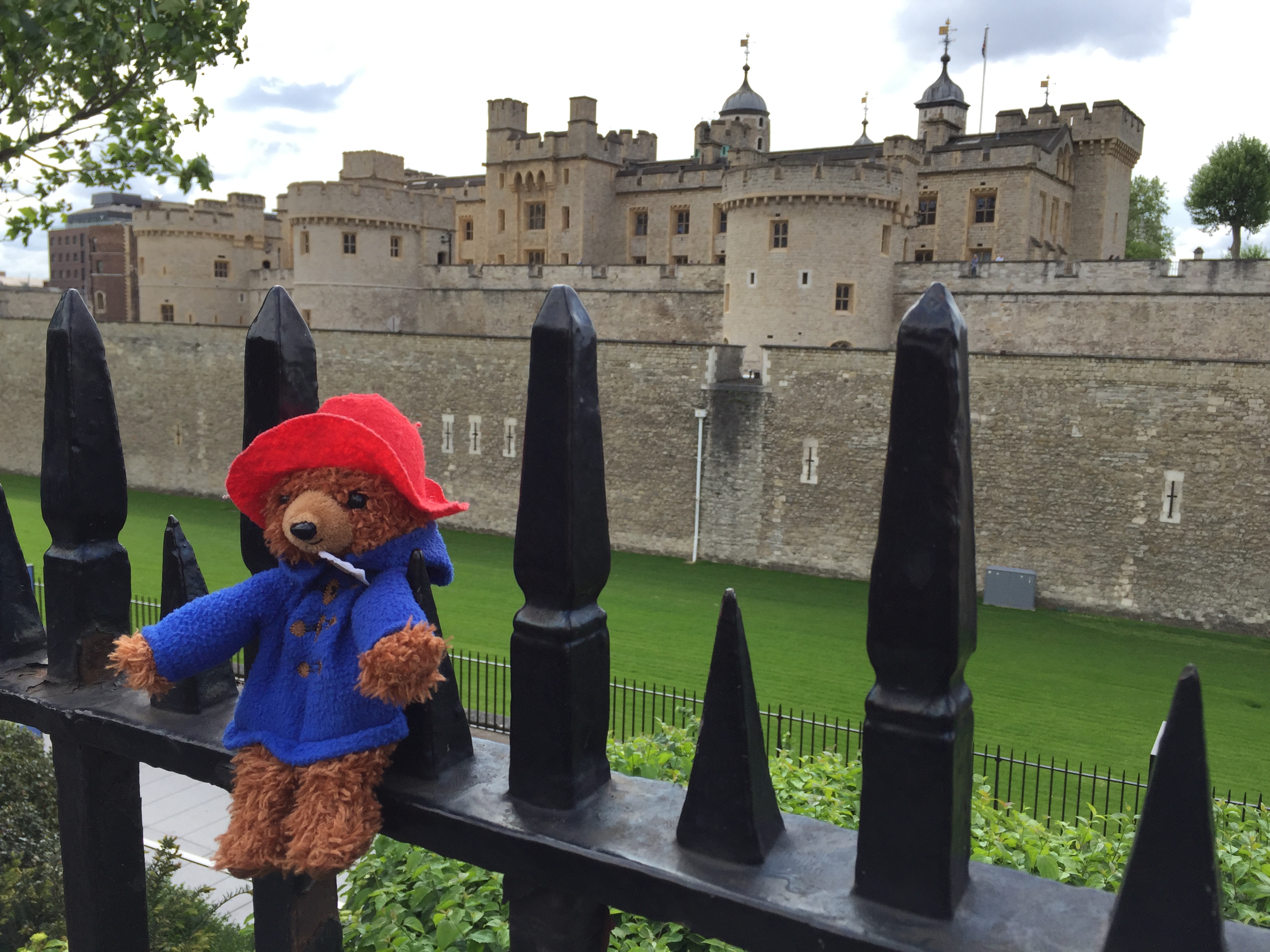 Princes and princesses, prisoners and felons, justice and lawlessness —the Tower of London has been the backdrop for countless stories of mystery through the ages. William the Conqueror won the Battle of Hastings in 1066 (read more about this in The Mystery of History Volume II, Lesson 55), and as a result he became the new king of England. He was coronated (crowned) king in Westminster Abbey on Christmas Day in 1066.

Recognizing how important London was in maintaining control of the country, William the Conqueror began building the innermost tower, now known as the White Tower, right away. His plan was to make it an imposing structure, intimidating to all who saw it. and indeed it was. approximately 90 feet tall, in a country where all building was down with wood, William had the builders use stone imported from his homeland, Normandy. 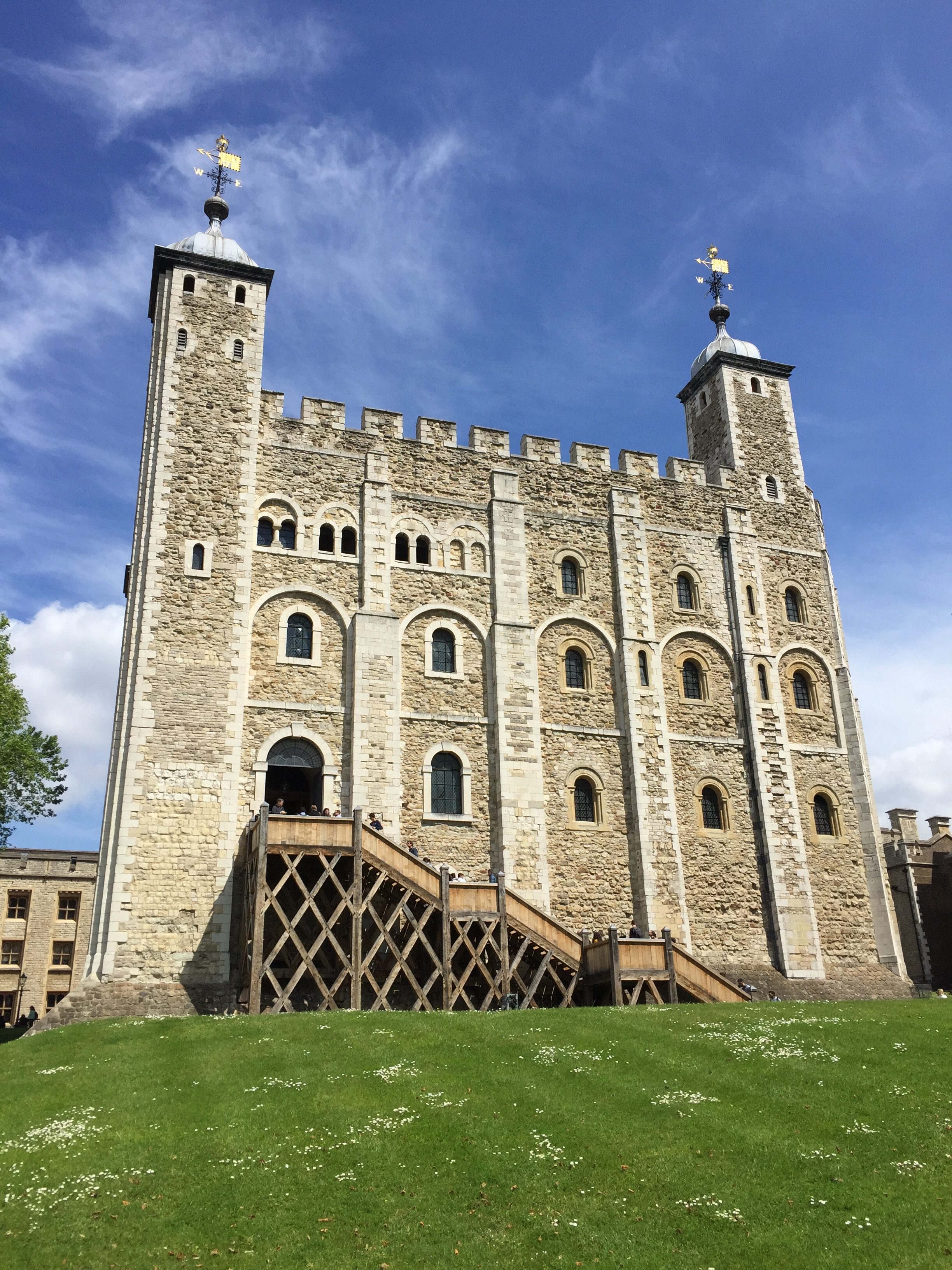 The White Tower was completed by William’s son, Rufus, who also spent time working on the palace at Westminster.

We know now that each building, Westminster Palace and the Tower of London, held specific purposes. Westminster was used more as a royal palace, and although some monarchs stayed there over the years, the White Tower was more of a royal fortress. The White Tower contains a beautiful chapel, the Chapel of St. John’s. It was here that King Henry VII’s wife was laid in state when she died and that Henry VIII’s daughter was betrothed. Still in use as a chapel, the Queen’s chaplain performs services here regularly. 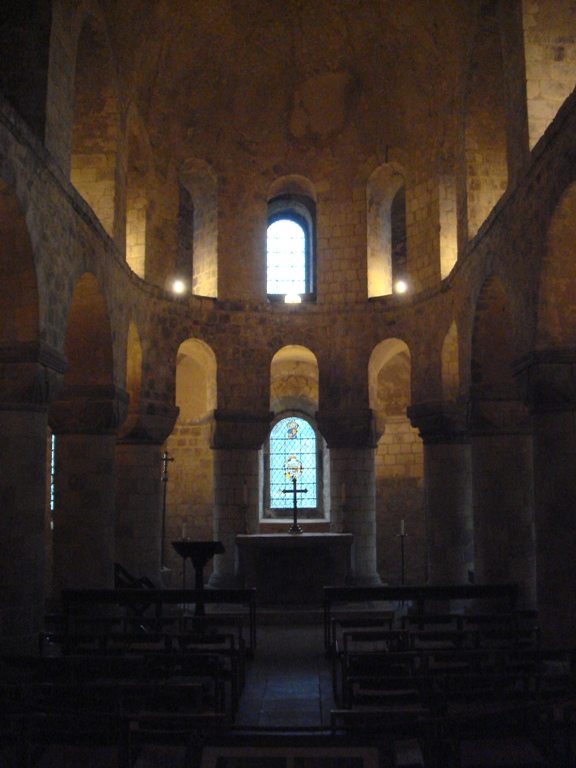 Kings continued to add to the fortress over the next few centuries until by 1350 it looked very much like the grand, imposing fortress we see today.

The Tower of London is probably best known as a site of imprisonment and executions. For centuries and centuries, angry monarchs would throw their enemies into the Tower to await execution.

Many prisoners were brought into the Tower by barge, down the Thames River and in the Traitor’s Gate (originally known as the Water Gate). 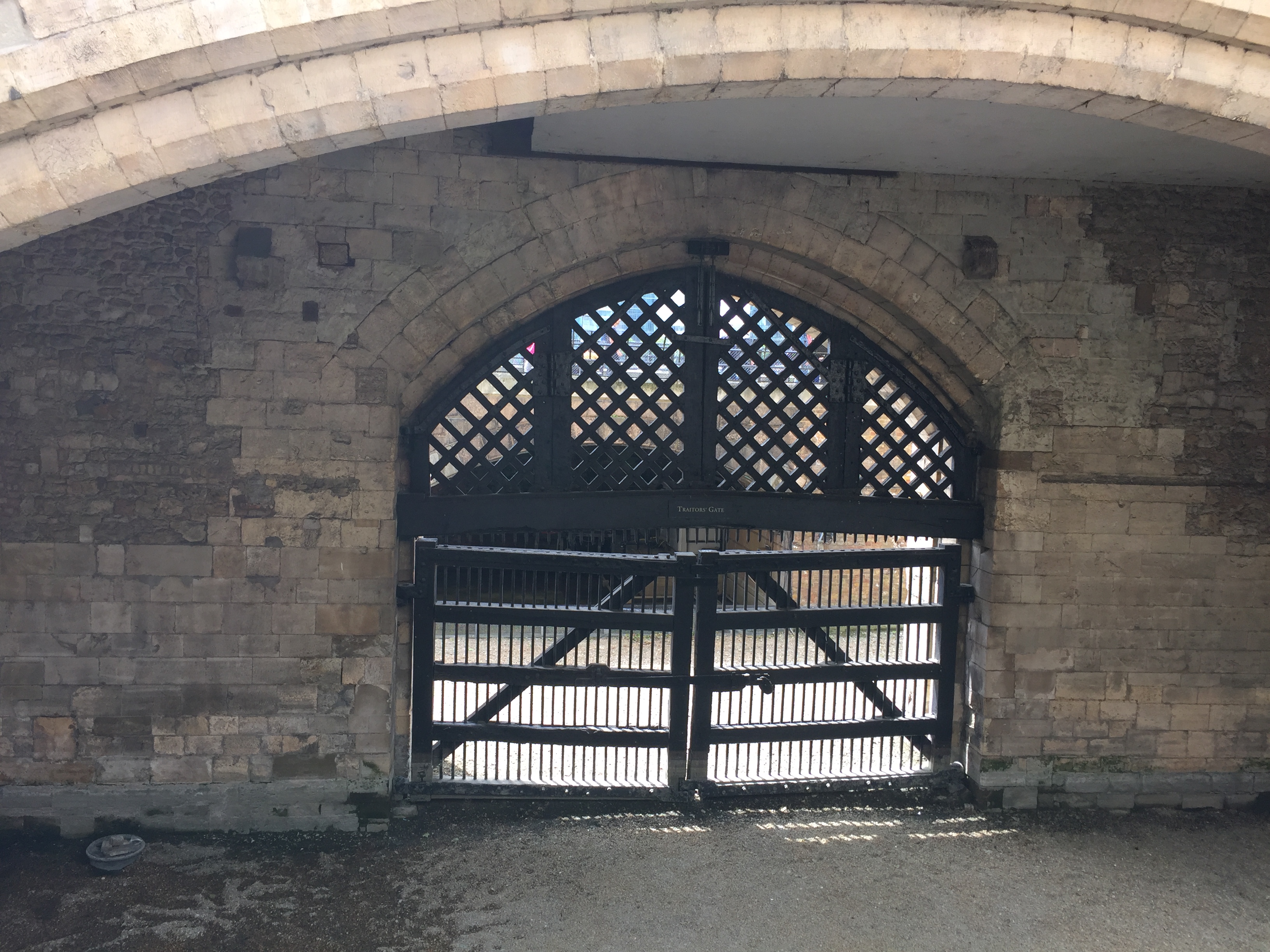 Prisoners were kept in Beauchamp Tower, pictured below. 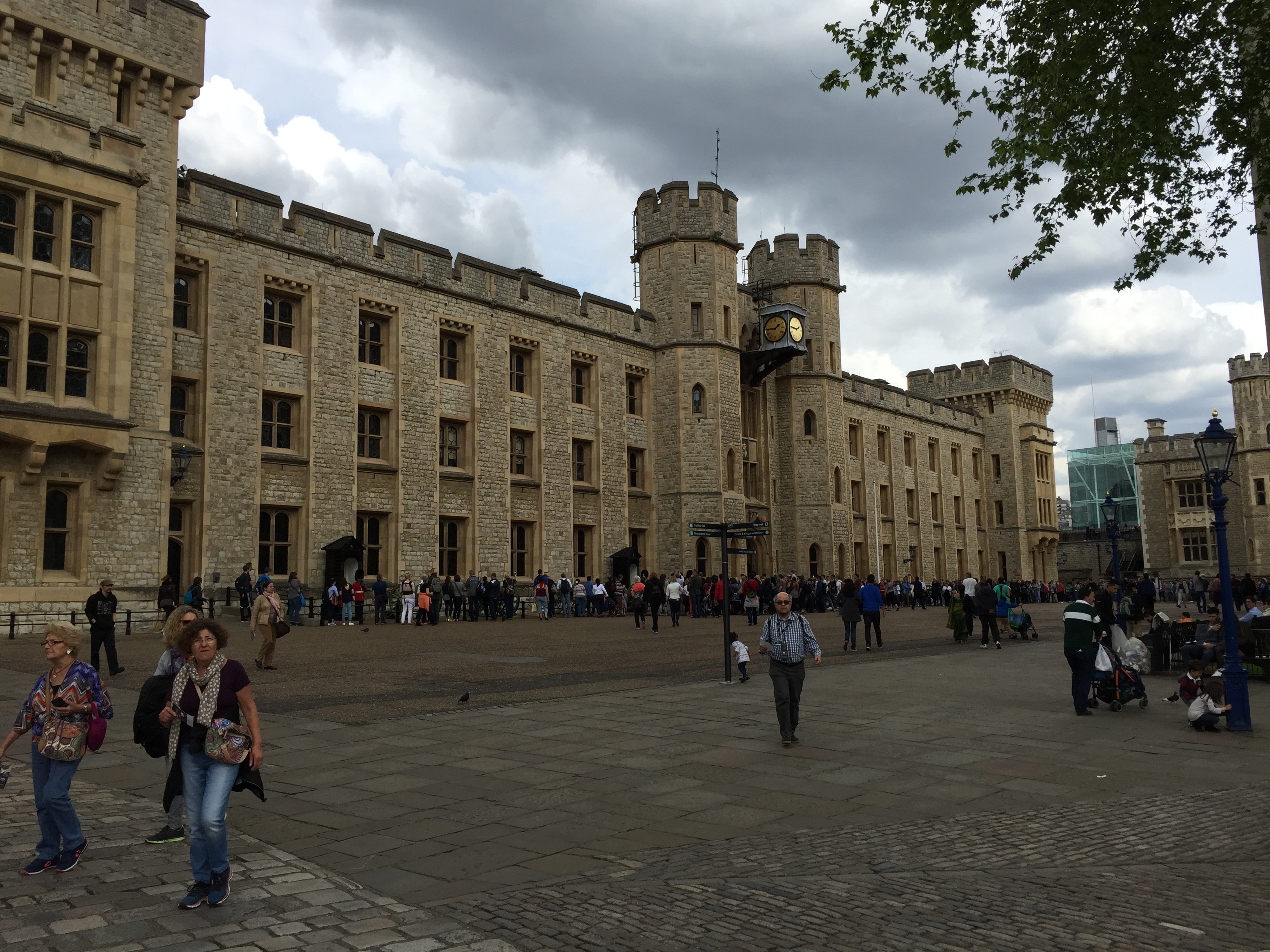 This room is one inside Beauchamp Tower where many outlaws were kept. It is adorned with centuries old graffiti, carved by those who stayed there, praying for their lives. 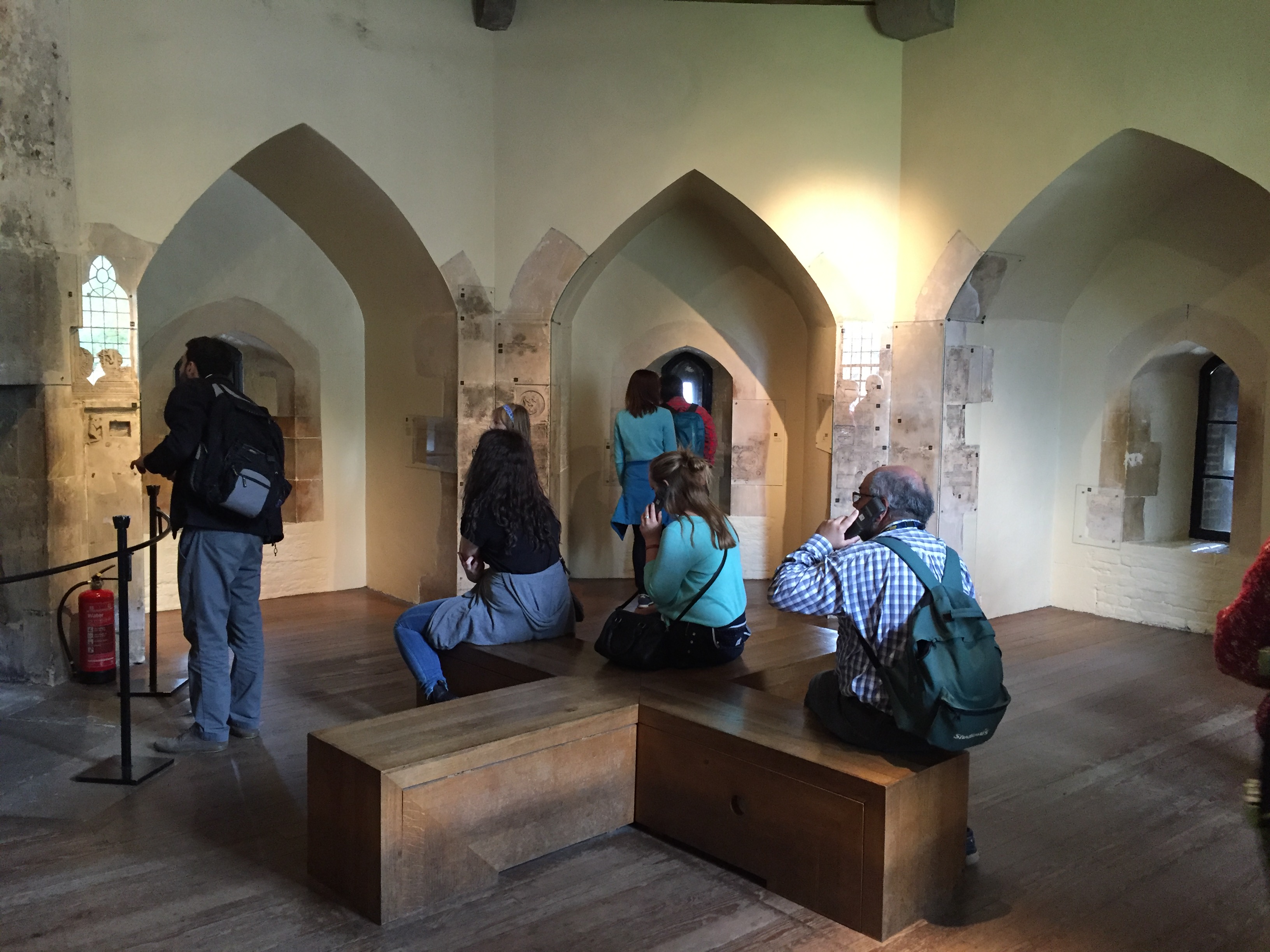 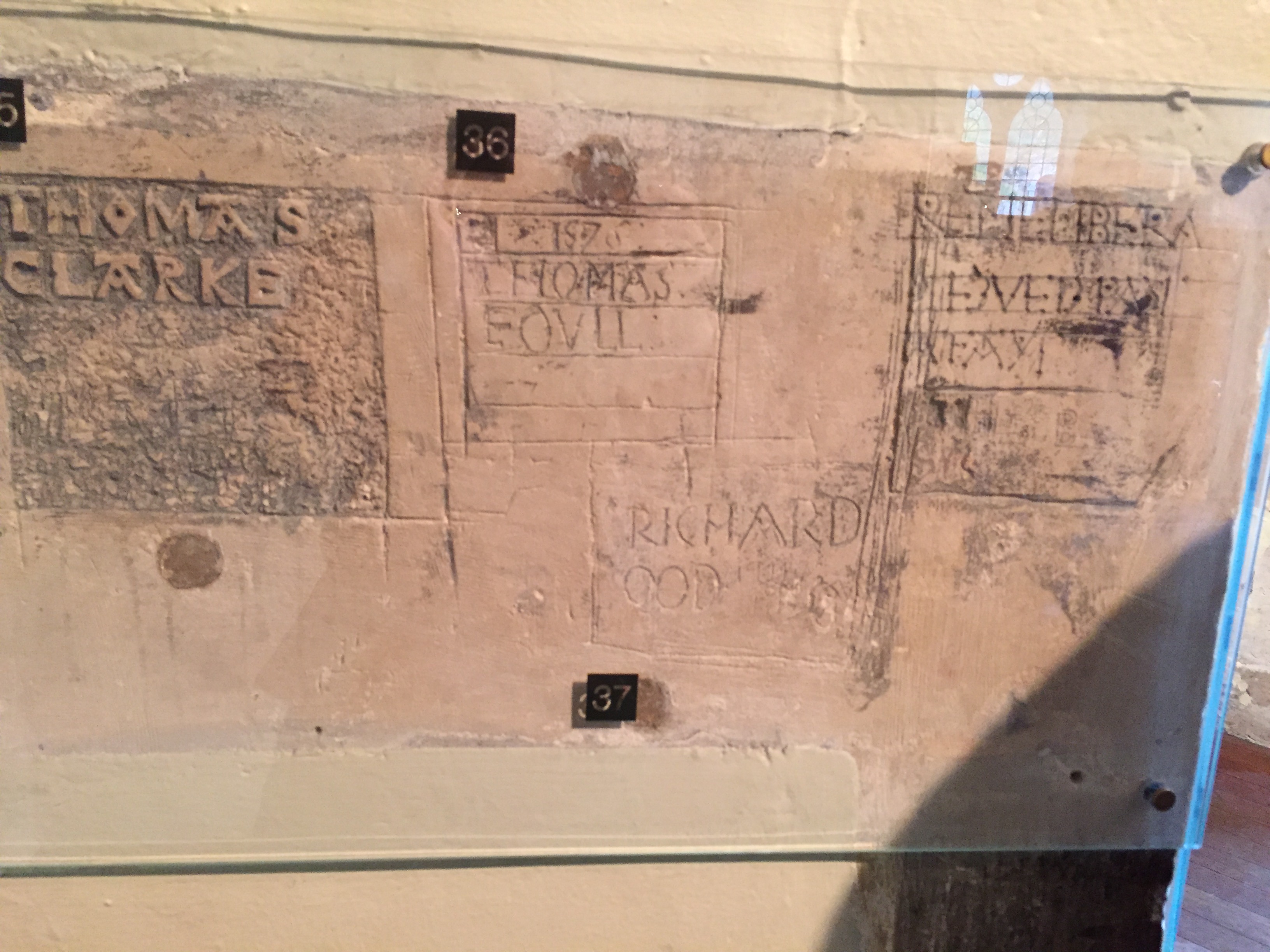 Here is the view from within the prison. It overlooks the execution site within the Tower itself – Tower Green. There were only seven recorded uses of that spot, but three queens were executed there — Anne Boleyn, Catherine Howard, and Jane Grey. 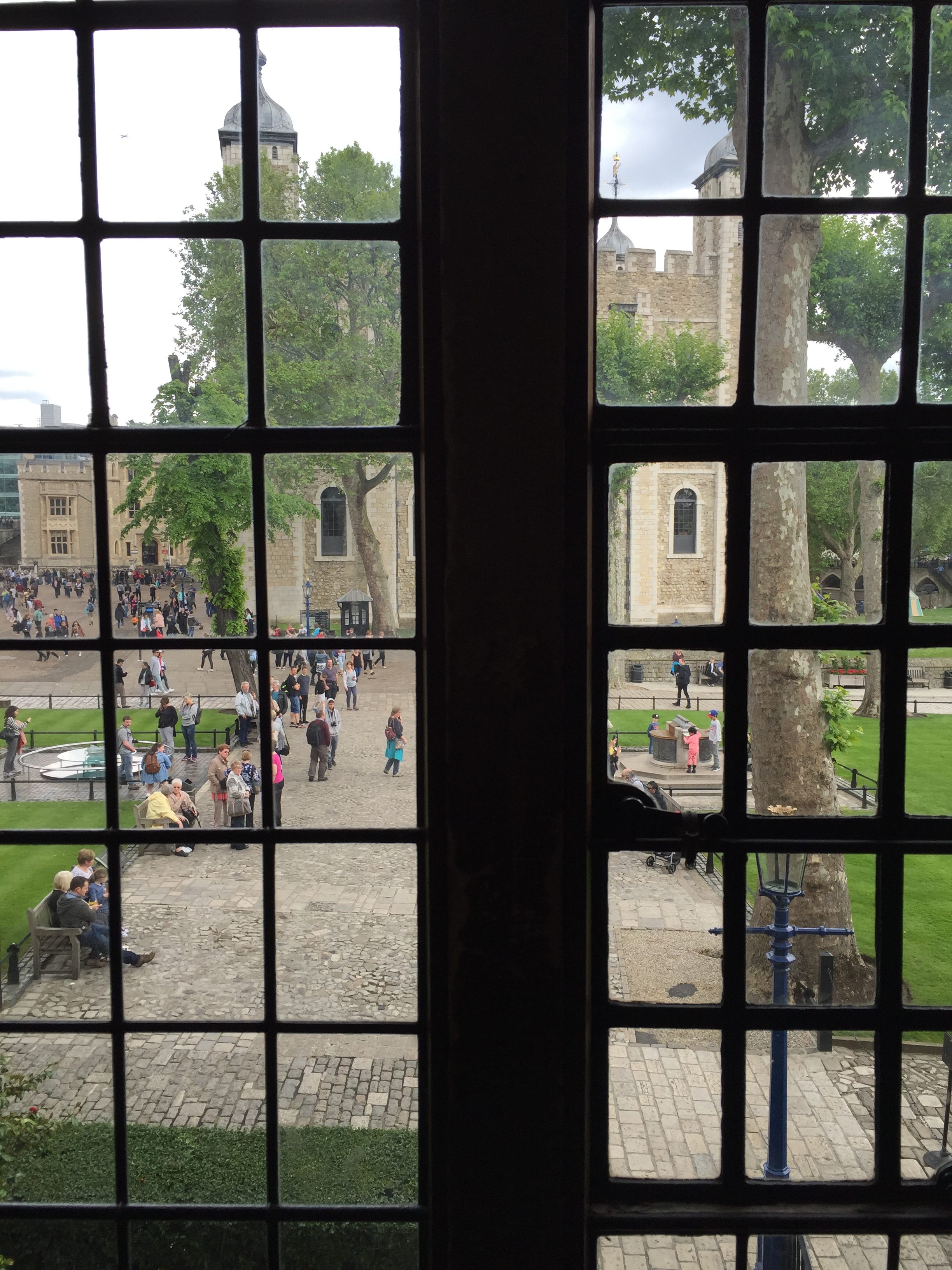 Most executions took place outside the Tower Complex on Tower Hill. The space is now marked with a monument listing those who were killed there. 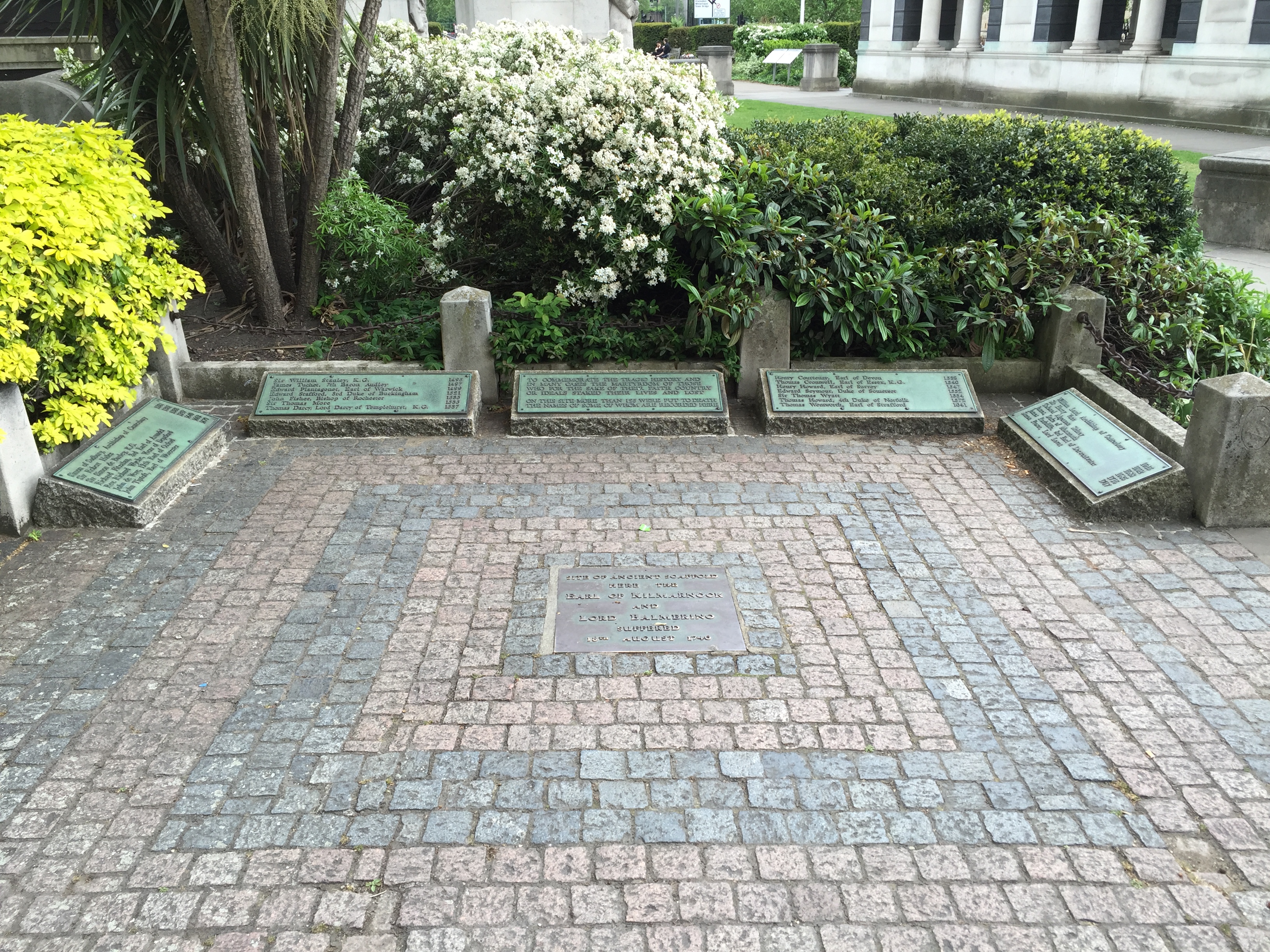 One of the Tower’s most famous residents was Sir Walter Raleigh, who was not kept in Beauchamp Tower like most prisoners but was one of the best kept prisoners. He was held in an apartment in the Blood Tower with his family. Originally built in the 1220s, the Bloody Tower served as the main access from the river into the Tower. when the outer wall was built later, the building no longer served this purpose but became the main route from the outer part of the Tower stronghold to the inner ward. It had some nice accommodations and is known to have held some of the Tower’s most notable prisoners. Sir Walter Raleigh’s room in the Bloody Tower looked like this: 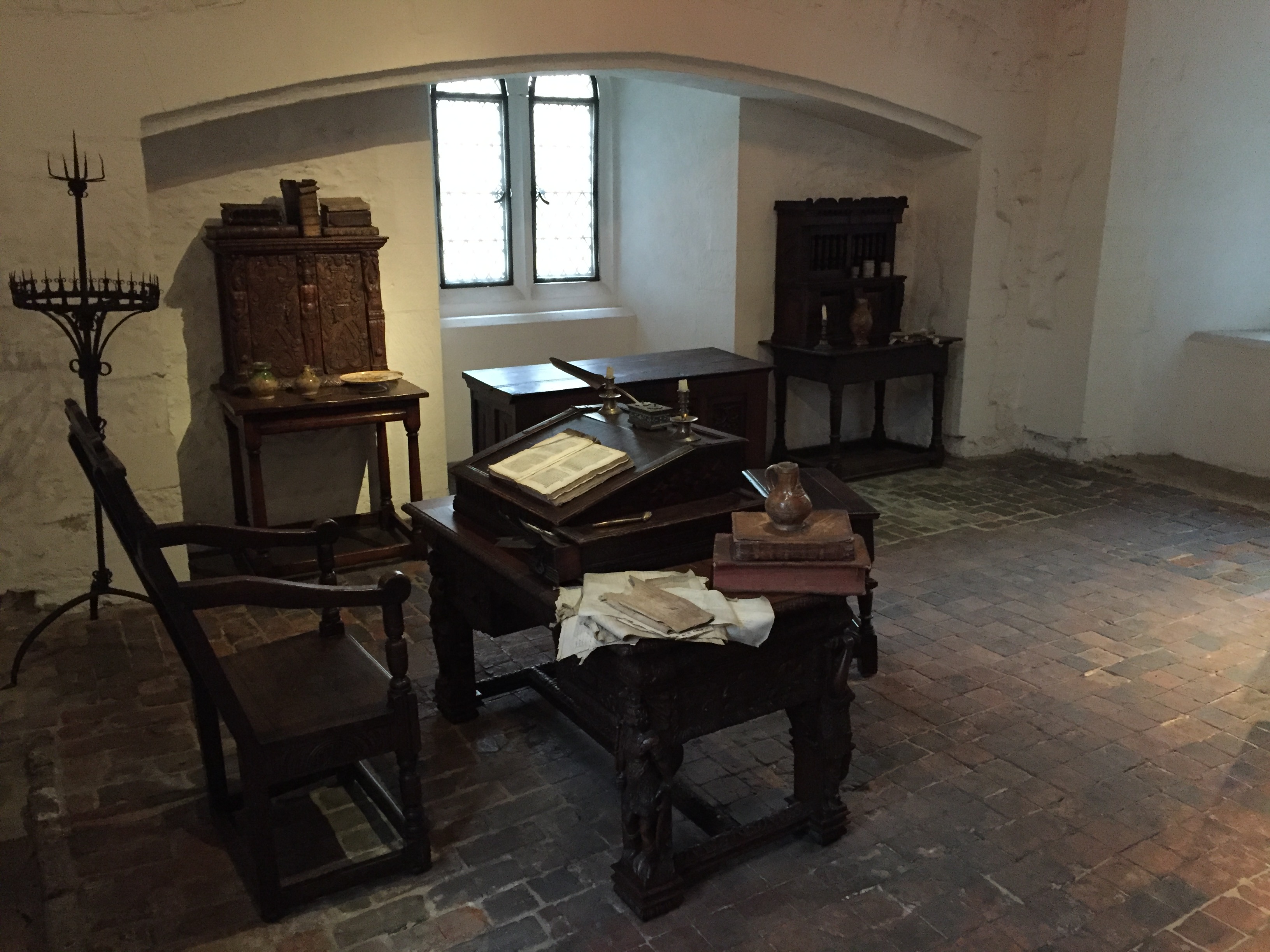 You can see the Queen’s House below. 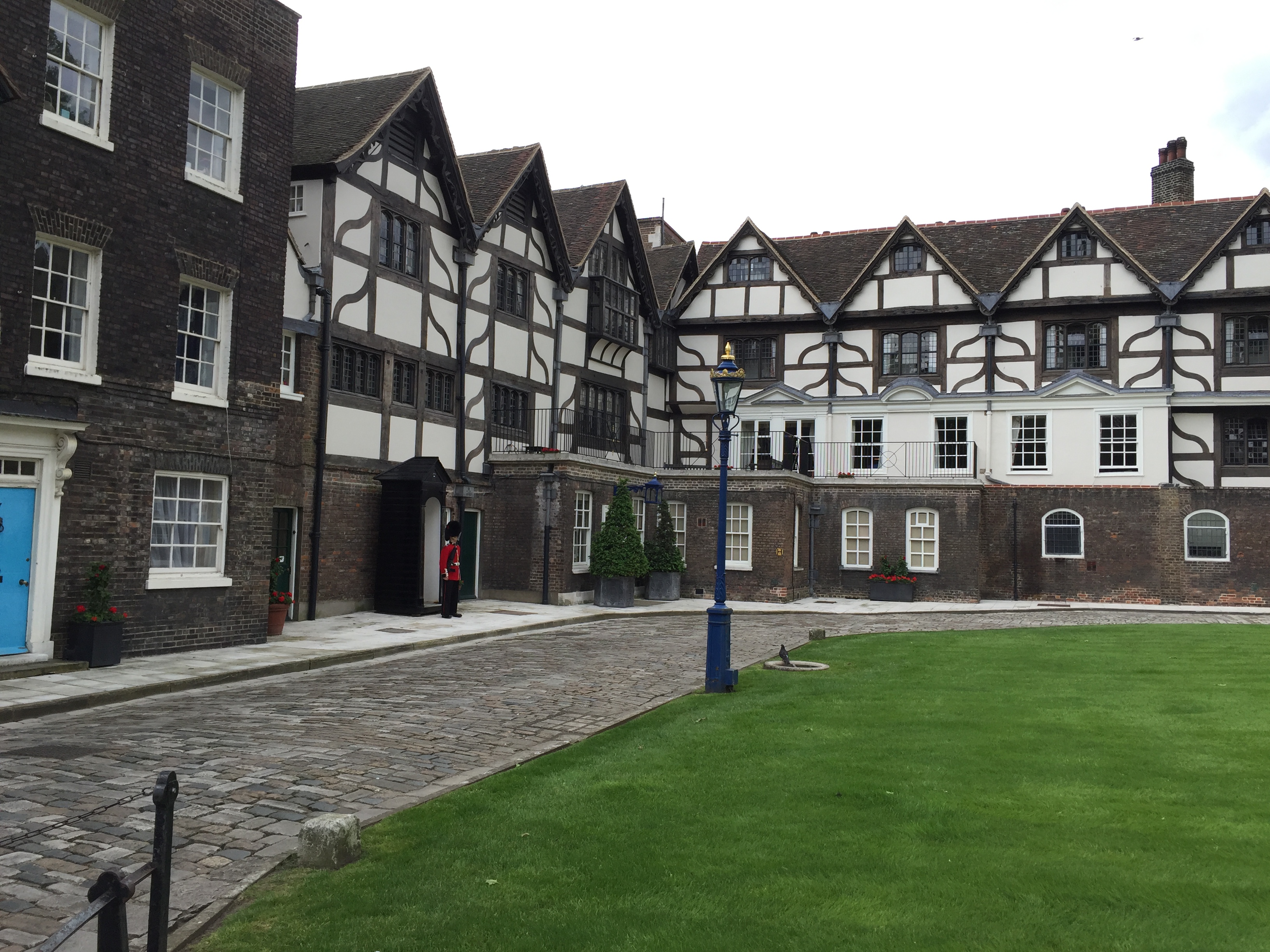 Fortunately, the Tower is not known only as a site of imprisonment. The other area in the Tower that is guarded by the Queen’s Guard is the Jewel House, which houses the Crown Jewels — all of the royal jewels and crowns of the British Monarchy! This building was once a barracks but was re-purposed in the 20th century to house the Crown Jewels.

The White Tower now houses the Lind of Kings, the world’s longest running attraction, which displays the armor of kings and their horses. This exhibition has been on display for over 300 years!

I hope you’ve enjoyed this brief tour of the Tower of London. This incredible location, though it has been marked by death and tears, is rich with England’s history and legacy.

You can read more about the Tower of London’s role in history in these lessons in The Mystery of History:

When I was a student, every subject was carefully kept in it’s own little bubble. If some of my... read more

Imagine for one second that money is no object and you can purchase any homeschool curriculum for the next... read more

As a homeschool mom, I do a lot of talking to other moms about homeschooling. A recent conversation with... read more