Early colonial art initially relied on artists from Europe who primarily painted portraits and historical moments as well as some landscapes in a style based mainly on English painting.

One of the first painters to visit America was John White (c. 1540 – c. 1593), who made important watercolor records of Native American life on the East coast. An English artist and early pioneer, White first arrived on the shore of present-day North Carolina in 1585, acting as artist and mapmaker. During his time at Roanoke Island he made a number of watercolor sketches of the surrounding landscape and the native Algonkin peoples. 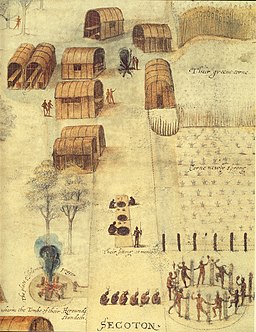 In 1587, White became governor of Sir Walter Raleigh’s failed attempt at a permanent settlement on Roanoke Island, known to history as the Lost Colony. This was the earliest effort to establish a permanent English colony in the New World. White’s granddaughter Virginia Dare was the first English child born in the Western Hemisphere.

In the later part of the year, the settlers pressed White to return to England “for the better and sooner obtaining of supplies, and other necessaries.” He was prevailed upon to sail, “much against his will,” in order to seek help.

In the early years of the Colonial period, most artists were officers in the army and navy, whose training included sketching landscapes. Eventually, as the settlements grew, communities were large enough to support professional artists, mostly portrait painters.

Religious art in the late Baroque style was preferred in the Spanish territories. While Native American cultures continued to produce art in their various traditions. 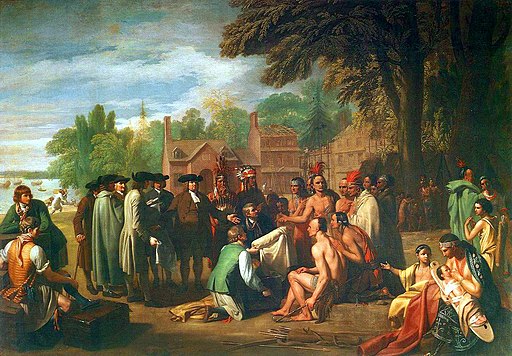 Treaty of Penn with Indians by Benjamin West circa 1771. Pennsylvania Academy of Fine Arts, Philadelphia via Wikimedia Commons

The Father of American Painting, Benjamin West (1738 – 1820), was an historical painter. He was active in England where he influenced a number of artists from America, including John Copley.

John Singleton Copley (1738 – 1815) was most noted for his portrait paintings. Copley is considered by many to be the greatest and most influential painter in colonial America. His works were innovative, depicting artifacts relating to his subjects’ lives. His skill for painting startling likenesses of persons and things, he came to define a realist art tradition in America.

Introduce students to the concept of Realism in contrast to Impressionism. This resource is helpful: Activity 1 A Real Impression.

Ask students to choose a photo to use as a reference (an animal, a person, or a still life). Then students should attempt to create a painting or drawing that is as close to the original photo as possible, using these components:

After completing a realist work to the best of their abilities, students will complete a second piece in the style of impressionism, focusing less on line and edges and more on the overall lights and darks in the composition.

A wonderful way for children to learn about the world and God’s creation is to spend large amounts of... read more

3 Easy Ways to Teach the Arts with History

As homeschool parents, we often find ourselves so caught up in covering core subjects that we neglect to include... read more

As a homeschooling parent, you may have an ideal scenario in mind when it comes to how your homeschool... read more

This is part of a series of posts about using Christian Kids Explore Creation Science in a homeschool co-op* of two... read more

I have been dealing with depression* off and on for much of my life, and although people don’t talk... read more