As Colonial art gave way to the more assured traditions of the 19th century, people in the eastern cities began to experience the sights of the American wilderness through the eyes of frontier painters. In my earlier post, Hudson River School, I shared works from Thomas Cole and the leader of the Rocky Mountain school, Albert Bierstadt.

Aside from landscapes, American artists produced portraits and a range of subject or genre paintings. Important 19th century American portrait and genre-painters include:

Winslow Homer (1836-1910), one of America’s most famous artists, had a talent for depicting nature in a way that reflected the American pioneering spirit. Self-taught in both watercolor and oil painting, his pictures deal with the common folk — fishermen, soldiers, sailors, woodsmen, and hunters. His watercolors are among the strongest interpretations of pure landscape and seascape ever painted. 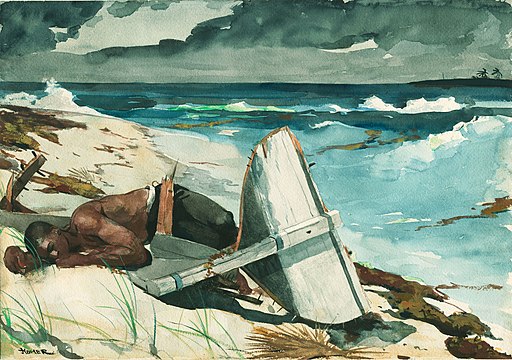 After the Hurricane, Bahamas by Winslow Homer [Public domain], via Wikimedia Commons

This compelling watercolor was painted during Homer’s second trip to the Bahamas in the winter of 1898–99. Depicting a luckless man washed up on the beach, surrounded by fragments of his shattered craft, the artist’s fascination with the rapid and dangerous weather changes of the tropics are eminent.

Utilize Homer’s painting, After the Hurricane, Bahamas, to initiate a discussion about more recent hurricanes like Katrina and Matthew. Have students use Homer’s works as a model for their own watercolor.

John Singer Sargent (1856-1925) was the finest American portrait artist of his era. He excelled in society portraiture and worked primarily in England.

El Jaleo is one of the greatest modern paintings by John Singer Sargent and illustrates the popular fascination with Spain of the time (recall the Spanish-American War of 1898). It shows a Spanish gypsy dancer performing a flamenco dance to the accompaniment of several musicians and fellow dancers, seated alongside.

Compare and contrast the emotion and feeling this painting evokes with the newspaper headlines printed in 1898.

The period following the Civil War also saw the beginning of the Arts and Crafts movement (c.1862-1914) in response to the negative social and aesthetic consequences of the Industrial Revolution. Primarily concerned with architecture and the decorative arts, it also included stained glass, wallpaper, textiles, furnishings, tapestry art, furniture, wood carving, metalwork, ceramics, and mosaics. Two notable female artists from this time include:

Ruth Henshaw Bascom, (1772-1848), was a folk artist who produced over 1,400 portraits of friends and relatives, many of which were life-size bust profiles with pastels on paper. 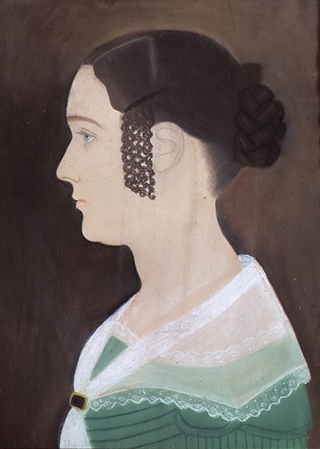 Bascom’s style and preferred media are easily recognizable. Encourage students to create a portrait of a friend or family member in her style.

Hannah Cohoon (1788-1864), a Shaker artist from Massachusetts, she had a unique style that was more abstract, simple and personal. A period called the Era of Manifestations represented a major spiritual shift within the Shaker community where “believers” regularly received spiritual visions which were revealed in song, drawings and dances. The people who received the visions were called “instruments”. The profound experience resulted in Shakers expressing the “gifts” received from Spirit in drawings, messages and songs

As you study art or American history, I encourage you to visit art galleries and museums both locally and wherever your travels may take you. We recently had the opportunity to visit the Smithsonian Museum of American Art in Washington D.C. and Isabella Stewart Gardner Museum in Boston . I can not begin to describe how incredible it was to see the works of these masters in person.

Traveling is not always possible, but you can visit the Smithsonian American Art Museum without leaving your home or school. Artful Connections is a series of videoconferencing programs designed to promote collaboration, critical thinking, creativity, and communication via discussion.

My parenting confidence seemed to peak just before we started reading aloud a book about fallacies. By chapter three,... read more

Using Periscope in Your Homeschool

This past spring a new social media platform was unveiled and over the next few months its popularity soared.... read more

Ninja Research Skills (Part 3) Absolutely Indispensable Reference Helps Yesterday, we talked about sources for finding out pretty much anything and... read more

Homeschooling During the Unexpected: Think in Threes

This post is inspired by a recent medical emergency recently when my daughter had a scary episode of anaphylaxis at... read more